Although on the blog we usually address rubbish removal in central London, today we’ll be peering through our telescopes and focusing on outer-planetary junk matters.

Recently our attention has been drawn to the growing problem of outer space junk pollution, when Nobu Okada, the CEO behind the Singapore startup Astroscale, warned of the dangers it could pose to humankind in the future. 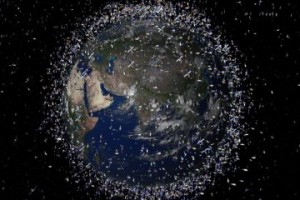 In a recent conference he spoke of the risk of being cut off from our own satellites, which we rely on so heavily, and potentially from the rest of space, if we continue to clutter our ozone layer with the levels of rubbish we have been releasing so far.

“Debris affects our daily lives. What if we can’t be prepared for storms, or watch the World Cup, or if ships couldn’t use GPS? Our daily lives are totally dependent on satellite technology.” he said.

Astroscale is one of the leading lights of the ‘NewSpace’ industry – the sector of private companies and new technologies which have sprung up to compete with existing, governmental programmes.

Okada has made it his mission to challenge what is thought to the biggest problem facing Newspace: taking out the space trash. And all the data suggests galactic rubbish removal will be no mean feat.

According to NASA, more than half a million junk objects are within the Earth’s orbit – from obsolete satellites to small miscellaneous pieces of debris.

And there are millions more that are too little to be traced. The sheer speed at which they hurtle around our planet means even these tiny objects can be destructive when they collide. The scenes from Gravity, although clearly Hollywood hyperbole, won’t seem beyond the bounds of reason in the coming future. Space experts now believe we’ve reached what’s known as the Kessler Effect – when the amount of junk objects in our lower orbit is dense enough to endanger the passage of shuttles and crew into outer space.

Until now, this has primarily been the concern of international space authorities, however experts agree it’s time for us all to wake up to the issue.

“Suddenly you have a debris-field acting as a real barrier to operations in the lower Earth orbit,” says Jeff Forrest, chair of Aviation and Aerospace Science at the University of Denver, “which would annihilate commerce in inner space, and make launching extremely risky.”

A handful of solutions have been proposed, from both private and government programmes, which have included zapping the rubbish with lazers, balloons, a solar sail and even a wall of frozen water and harpoons.

While these rubbish removal attempts are technologically viable, the main issue is to make them economically feasible. Making money out of an outer space junk removal service seems unlikely without government intervention.

However, Okada says Astrocscale is proposing a highly effective solution which won’t provide as many budget headaches. It involves launching a craft with six small buoys that attach themselves to the largest bits of space debris and power them back into the stratosphere. For the sake of our skies we sincerely hope Okada receives all the backing he needs.

And one thing we are all agreed on here at JunkWize, this certainly puts things into perspective compared to our commercial waste management in London!