Clicking Here
Be Junkwize
Home > Blog > Fly-tipping in London: Is it out of control?

Fly-tipping in London: Is it out of control?

Fly-tipping really gets on our nerves. It shows total disrespect for locals, laws and the environment and frustratingly we are seeing increasing amounts of it in London on a daily basis. Before we get started on this issue, it is worth making it clear that the authorities define it as being ‘the illegal dumping of waste’.

After Christmas and into the New Year there was plenty of evidence of it; more than usual, we’d say. Despite councils making their Christmas tree recycling policy very clear, people just chose to ignore them. As such, we saw trees piled up in all sorts of places. Regularly we would see piles of them at the ends of Kensington mews where a quiet corner existed. Equally often we saw the green spaces of Lambeth and Wandsworth exploited and piles of trees quickly formed. The problem with that type of festive waste is that once one person does it, others innocently follow thinking it is a designated collection point. So some of this, although wrong, is understandable. 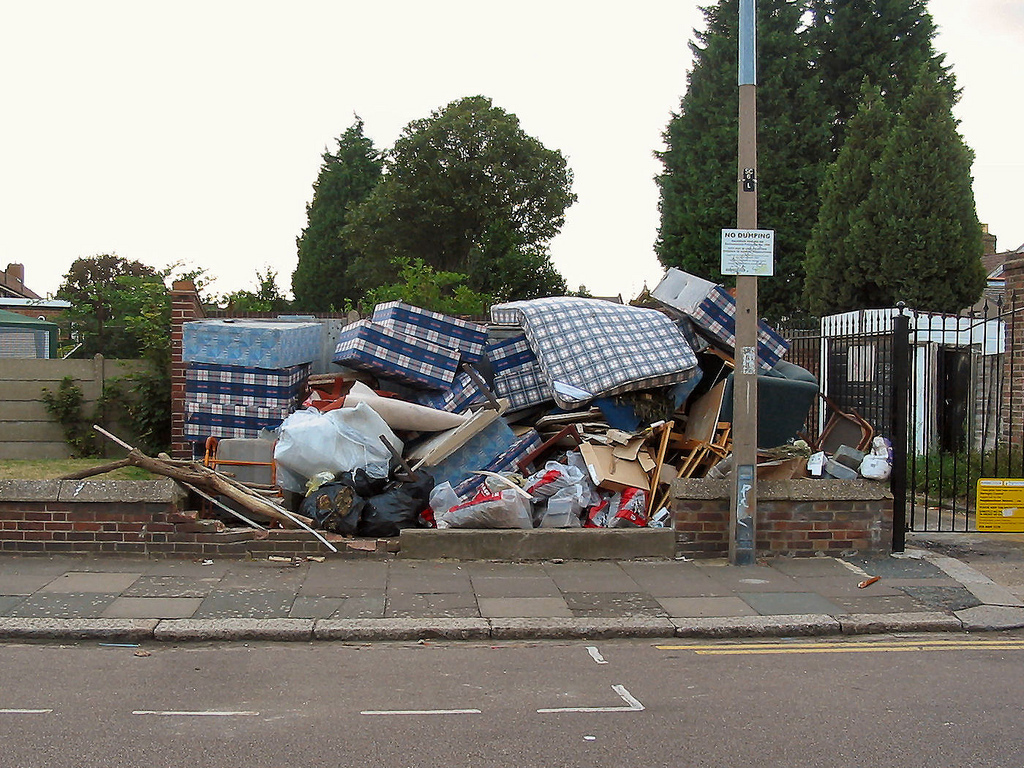 What’s never excusable is the act of dumping waste illegally when you know fully well what you are doing. It was recently reported that the City of London Corporation was appealing for witnesses regarding a new spate of fly-tipping on Chingford Plain. We also read that every year the Corporation is forced to deal with c. 730 incidences of this type of crime. They even have a team of 12 staff who work on this alone! Our basic calculations show that this means that at least £300,000 is spent on the administrative hassle caused by fly-tipping in this one part of London alone. Think what that could be better spent on.

Last November we read all about a massive and dangerous stack of junk that was just left with total disregard along the middle of a street in Lambeth. It stretched for about 30 meters down the road and it restricted access to the street. Can you imagine what that would mean if a fire engine or ambulance was forced to travel down the road in an emergency? Hackney has also had more than its fair share of illegal rubbish dumping incidents in recent months. These instances highlight the importance of proper participatory waste management plans.

Theoretically if someone is found fly-tipping they can be fined up to £50,000 and sent to prison for 5 years. Yet in practice this simply doesn’t happen. What actually happens is that the offenders that are caught seem to be fined a few hundred pounds before being sent on their way.

For commercial fly-tippers, we feel that a better deterrent would be an automatic 2 year revocation of all the licenses they need to function fully as a corporate entity. This would surely stop people from being tempted by this lazy offence.

However, it is also important to acknowledge the reasons many fly-tip. Is laziness one of them? Sure, but it is only one. Councils also have a duty to make it crystal clear where rubbish should be dumped. They also must ensure that this process is as easy as it can be for everyone involved. Perhaps then all Londoners can once again take pride in the streets they live in.

What’s sad about the current state of affairs is that when cheap, quick and easy junk clearance services exist like those on offer here at JunkWize, there is no need to fly-tip. With prices of fuel being what they are, the savings gained by skirting around dump fees are negligible.

UPDATE: Just after this post was published we were informed of this sickening instance of fly-tipping in Croydon, South London.